Lathapon Korkiatarkul devlops his passion in materiality further in his latest exhibition in which all the works are displayed in their most exposed form, leading to the following conversation between his artworks and viewers.

Amidst the silence and stillness, the installation of rectangular forms of various dimensions and sizes seems somewhat unceremonious. The pieces are positioned to have distance between each other, some placed right on the floor, following the physical and natural features of the objects in a life-like manner that makes it hard to pinpoint whether the whole piece is a painting or a sculpture. 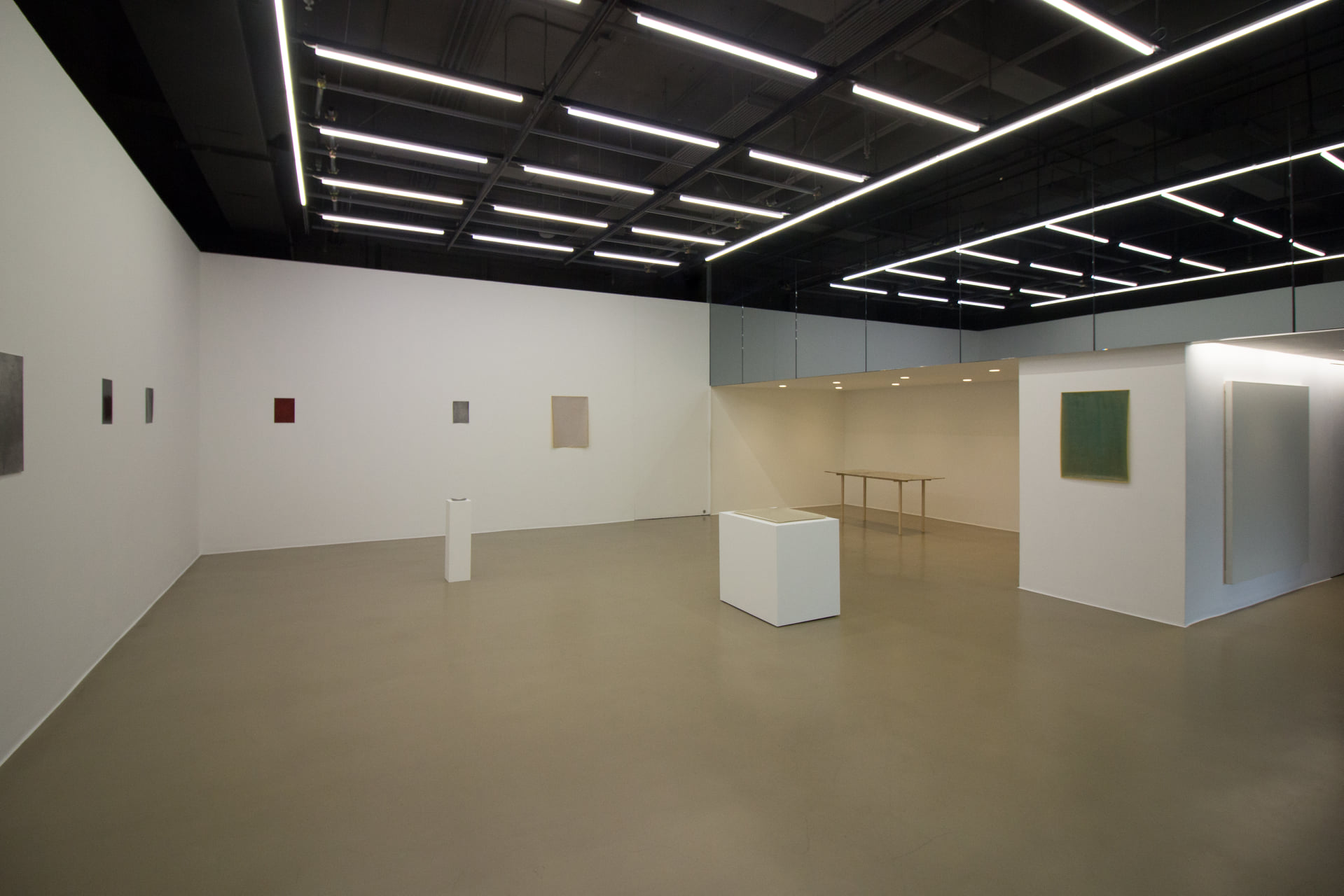 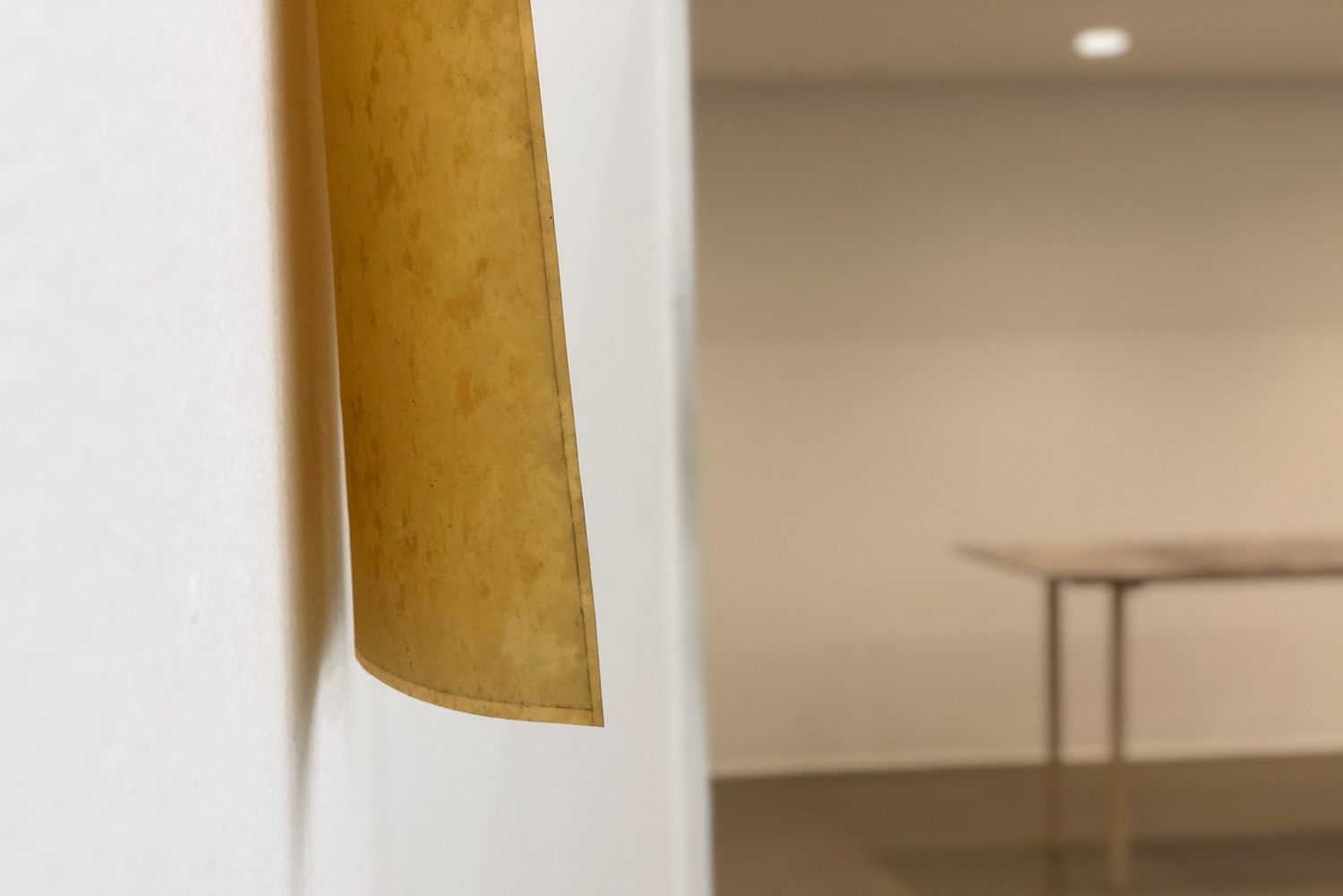 The conversation begins once I laid my eyes on the works. Each piece pulls me in, drawing me closer. Unknowingly, I find my thoughts and imagination running wild, interacting with what was appearing before me. From a quick glance, I saw a minimalistic painting on a piece of canvas and a simple-looking drawing on paper, placed with such freedom from their physical natures. Questions arise in the middle of the conversation. Is this paper? Is this really canvas? The wonder keeps my eyes glued and the urge to take an even closer look grows, wanting to inspect it closer, clearer and in greater detail. The small particles of dust, the scratches on the paper are so refined that they turn whiteness into a glossy surface. The thickness and cracks of the paints’ layers are now more visible, so is the way they meaningfully interact with the smooth textures.

Latthapon Korkiatarkul is an artist with a special passion for materiality. He has been searching for different processes to transform physical conditions and properties of objects. In turn, allowing for definitions, aesthetics and connections between reality and objects to alter and change their values. One can say that he has created new meanings on the other side of the spectrum, existing beyond one’s ordinary imaginations and expectations. A bank note with all the details scraped off, an egg with polished surface that looks so glossy and marble-like are among the examples. His solo exhibition at Gallery VER four years ago, (Un)composition, featured a series of paintings whose compositions were freed of all constraints. The immaculate smoothness on the surface showed no traces of brush strokes, just remnants of hair from a paint brush and a cluster of dust buried under the layers of paints. The compositions became unpredictable. He created the work using painting techniques where paints were left to dry, trapping a bunch of dust particles from the air during the process. He then proceeded to place the captured particles, painting another layer to add an extra element to the thickness. All the steps are parts of the process that bases itself on time, without any representative use of symbols or stories, but merely the aesthetics of the objects appearing before one’s eyes.

His latest exhibition, “Conversation Piece”, a representation of another level of conceptual developments of the objects in his surroundings. Papers and canvases are transformed into three and four dimensional objects. There isn’t any resistance to the visuals he has created. He uses fundamental techniques of illustration such as drawing and painting in both vertical and horizontal axes, and basic artistic compositions like lines, weight, colors, surface and plains where the two objects act and react to each other, as well as the use of monochromatic colors with each of the plains. The techniques result in the naming of the painting and drawing pieces, following the methods and mediums the artist has chosen for each piece.

Latthapon intended for the materials and process to be the most self-explanatory as possible. He shortened the time spent by collecting the dusts in his bedroom and mixing them with colors and varnish to keep the acrylic clear, and consequently accentuated the details of the dust in the paint’s texture. During the process, Latthapon continued to sketch on paper. It became the starting point of how he began to get to know the materials before gradually using them in various formats with mediums such as black pencils, inks, oil and acrylic paints. The continual lines were created from different levels of pressure and pencils of varying grades. The papers he chose for the work got wrinkled and twisted from their original form as more weight was put on it. He soaked some of the papers in Linseed oil, allowing the pieces to fully absorb the oil content before painting them with ink or acrylic paints.

All the works are displayed in their most exposed form, absent of frames and completely fragile, showing their fullest potential and revealing the materials’ very essences. The surfaces of some of the works reflect colors and shadows of the person standing in front of them, simultaneously reflecting the physical presence of the surrounding environment, and creating conversations with the viewers as the distance becomes smaller. The light, thin paper enables us to see the energy moving inside the gallery, as if the works have come to life. Nevertheless, ‘time’ is still a challenging factor for the way each art piece changes. Latthapon’s use of continual actions and reactions between the objects, including the conversations between his artworks and viewers has led to the formation of the objects’ new appearance, which has occurred and been affected by reactions and time. For what it is and what it has created, “Conversation Piece” is, indeed, an intriguing clash of Post minimalism and Contemporary art. 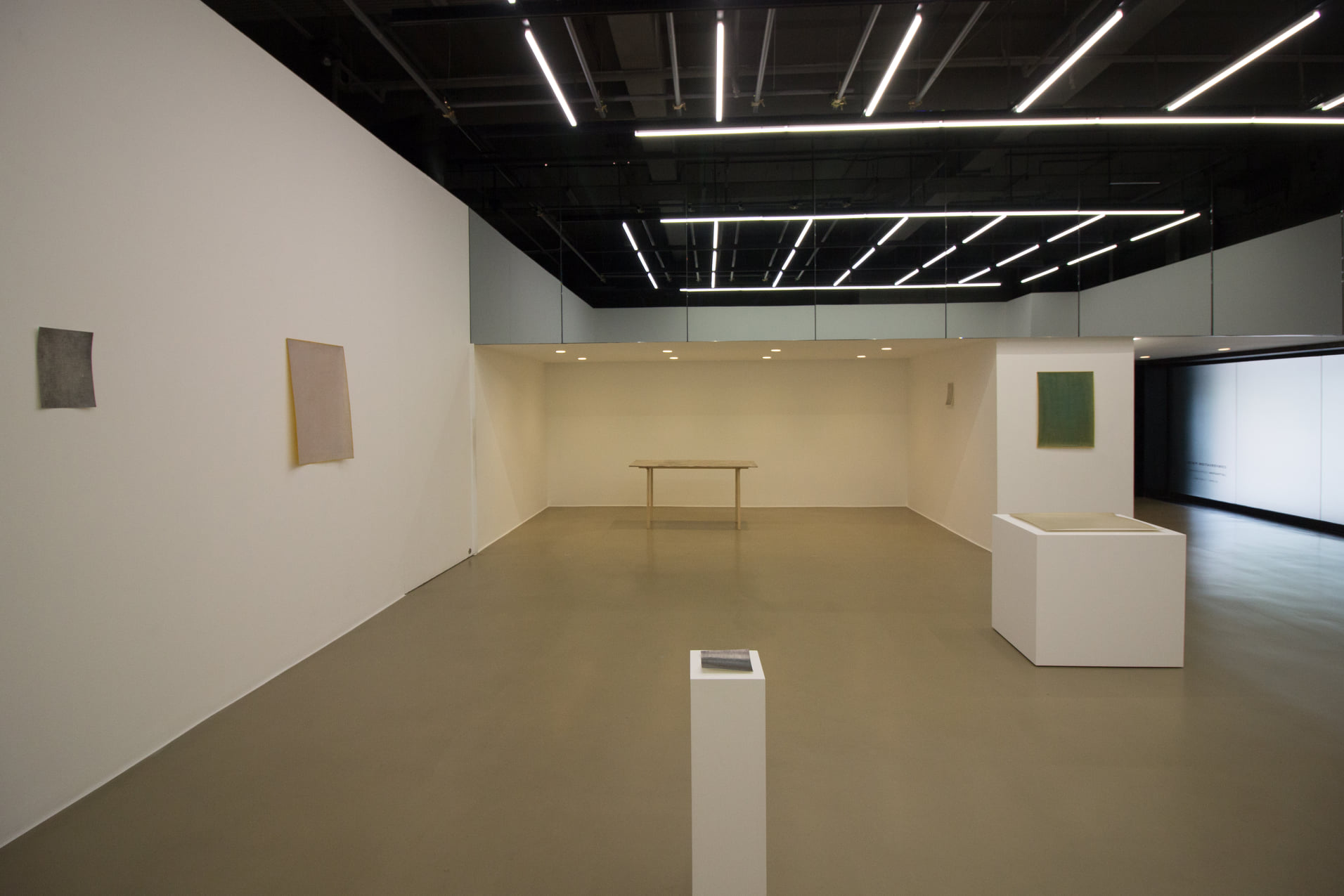