Community spirit, the strength of the Indonesian art scene, played an active role in the success of the recent Art Jakarta 2019, Indonesia's biggest art fair.

The 11th edition, which featured 70 Indonesian and international art galleries, concluded early this month with robust sales and high visitor volume from within the region and afar. Among the guests were international and local collectors, art enthusiasts and art world professionals.

The wealth of talent showcased at the Jakarta Convention Center Senayan was mind blowing, with each exhibit a reminder of the artist's ability to express themselves and challenge painting conventions. A wide array of art forms was presented, everything from paintings and sculptures to architecture, photography and films plus the latest technology used in installations.

The Art Jakarta scene continues to go from strength to strength, with its goal to offer space that represents artists and their initiatives via amazingly dynamic artwork still the cornerstone. The event also served as a dialogue for global art scene developments that offered varied perspectives by veteran art collectors, prominent artists, curators and critics from not just Indonesia but the Southeast Asian region.

A Thai representative at Art Jakarta, Nova Contemporary's Sutima Junko Sucharitkul, said Jakarta is one of the strongest art markets in Asia.

"There are a lot of art collectors based in Indonesia who really have a strong connection to Southeast Asia, so I thought by having Thai artists participate in this event it would help promote Thai artwork in this region and beyond.

"In fact my aim is to not just promote Thai artist's work overseas but also bring the artwork of international artists to Thailand.

"As Jakarta has a strong, serious-minded group of art collectors, I believe that by my joining this art fair, they get to experience the progress art has made in Thailand. Despite the geographical proximity between Thailand and Indonesia, I feel there is still a lot both countries don't know about each other's artists. I hope to bridge that gap at art festivals such as this, by bringing our artwork here."

Sutima decided to bring artwork from both emerging and established Thai artists to showcase the current and contemporary art scene in Thailand. She reached this decision primarily because a quick background research on Indonesian art collectors made her find out about their preference for colourful yet not too conceptual art.

Passionate about seeing Thai artists progress, Sutima is devoted to supporting them by leaving no stone unturned in the process.

"I am here to support Thai artists and the Thai art scene because I feel we have a lot of great artists, but their talent is very undervalued and not properly promoted. That is why four year ago I started Nova. We are trying very hard to promote our artists internationally by arranging residency programmes and a joint biennale. It is important for them to be offered that opportunity.

"I also support female artists because the art world is largely male dominated. I believe there is huge potential in our female artists that is yet to be tapped into."

Two Thai female artists making their debut in Jakarta were Aracha Cholitgul and Prae Pupityastaporn. Both artists believe the exposure received from participating in Jakarta Art will help them receive international exposure and broaden their audience base. 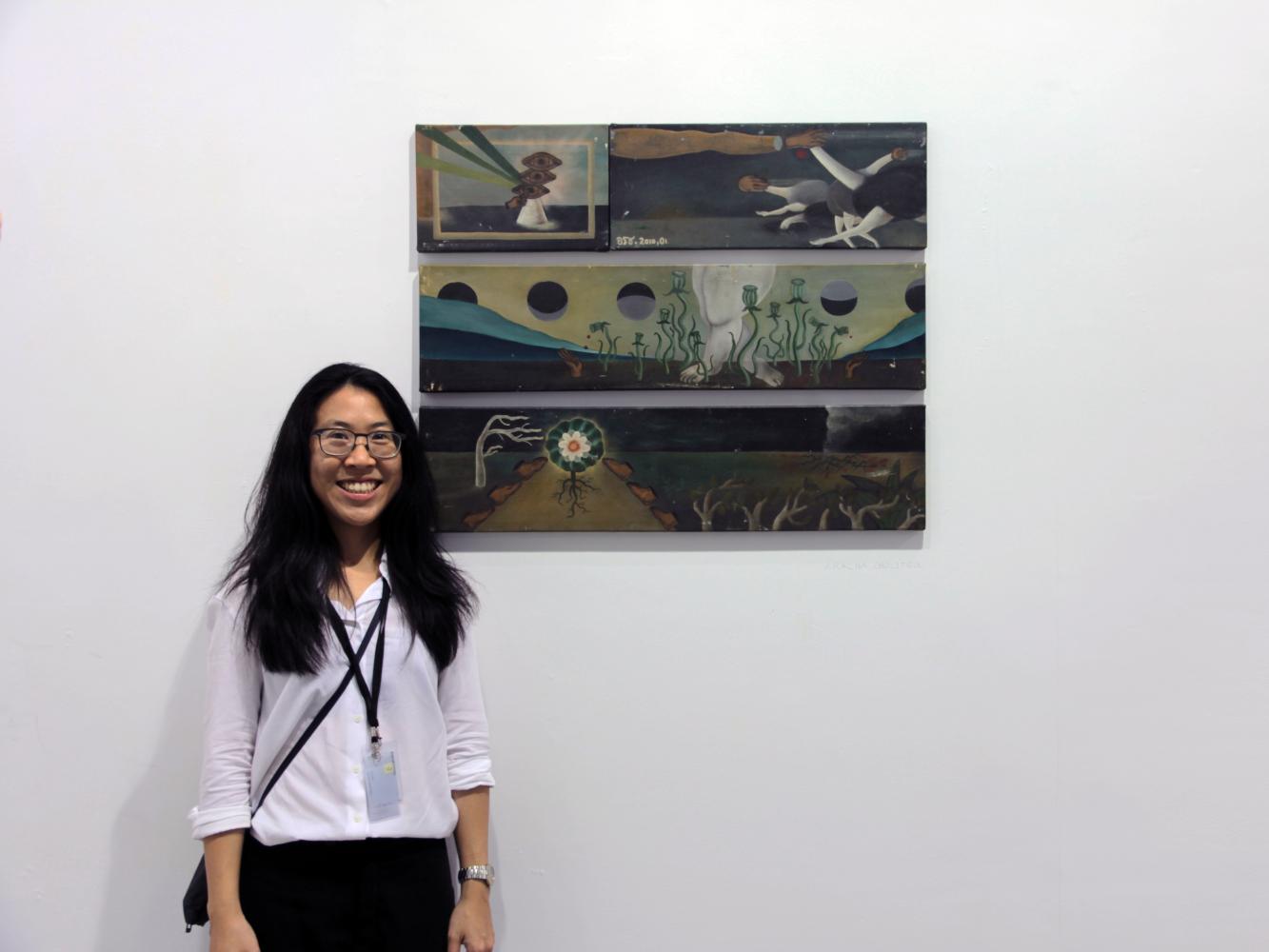 "In such events you get one chance to impress, so I have brought artwork that has great significance for me," said Aracha, 31. "Work I completed right after I graduated from Chula university. It was a time in my life where I was uncertain how to go about becoming an artist. I was also on an emotional roller coaster ride because I found myself struggling to reach family expectations of following in the footsteps of my parents and younger siblings who are all in the medical profession.

"The hurdles I found myself facing made it all the worse as I was seriously contemplating running away to Mexico. Don't ask me why I chose Mexico, but back than I just felt I needed to get away from the drama unfolding in my life. It was during this desperation that I created this artwork which holds a lot of meaning to me." 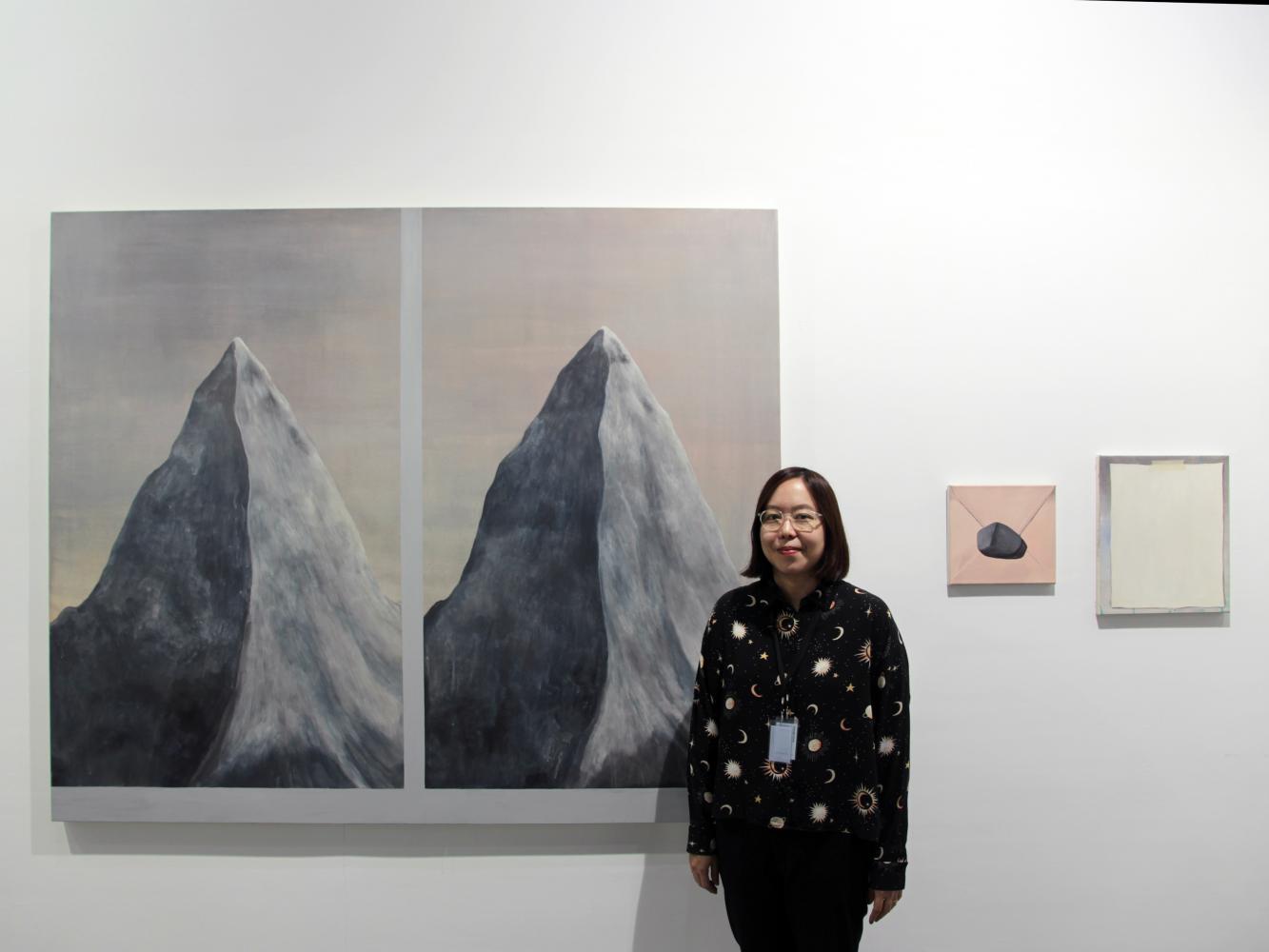 Prae, 38, had it slightly easier as her parents did support her decision to become a painter even though they were not totally sold on whether she would be able to make it a career.

"I picked my artwork titled Twin Peaks because to me it has perfect visuals and theme. It is my favourite work. I am inspired largely by my surroundings, books and sometimes even phrases I hear.

"My desire is for my artwork to come out as natural as possible. I prefer to create work that is open to interpretation," said Prae, who has an art degree from Düsseldorf, Germany.

Prae said the greatest challenge was obviously to make an attempt to create peaks that are as identical to each other as possible. "Of course, the end result is that no mater how hard you try, you just can't get it to look identical."

Being a part of Art Jakarta helped both women to grow as artists, said Aracha.

"The whole experience was interesting for me because this was the first time I attended an art fair and showcased my work. It was definitely a learning curve. I really liked observing how the galleries installed and managed artworks and all the behind-the-scenes stuff. But the nicest experience was to meet collectors from other countries and hearing what they had to say about my artwork."

Prae added: "Art Jakarta turned out to be a really special experience for me because I was debuting my artwork. In the past I frequented art fairs and was the audience to other artists' work, but this time I was showcasing my work. This helped me to observe the reaction and comments from spectators. It was pretty nice to have the opportunity to speak with some of them. It was always interesting to know what other people saw in my painting.

"I think it was a good exposure for my work, so I am grateful to have been given this opportunity."