Tada Hengsapkul's new exhibition takes a look at the long, recalcitrant shadow of the military

In the aquatic chamber, the tank looms. Encrusted and barnacled, the mighty war machine has become a home of fish and corals. It seems incapacitated, abandoned, useless. Such is an illusion: if the tank is submerged, we're down there with it, drowned in that inexorable aquarium. Look, its gun still points at us, and its shadow all-consuming.

Tada Hengsapkul's "You Lead Me Down, To The Ocean" is an exhibition of the moment, by design or by chance. Opening at Nova Contemporary on Ratchadamri Road last Thursday, one day after the old-new/new-old prime minister was confirmed in the joint parliament, the show's metaphorical manoeuvring is matched by the depressing real-world politics in Thailand. "You Lead Me Down" is a look at the long shadow of military might and folly, its distasteful legacy that originated during the Cold War (or earlier) and staunchly refused to go away.

Two years ago Tada held a solo exhibition at Cartel Artspace,   but before the show ended its run he was compelled to remove his work -- a conceptual installation piece about political exiles whose lives were affected by the 2014 coup d'etat -- when uniformed soldiers showed up at an adjacent gallery to inspect another "sensitive" art show, by Harit Srikhao. The new show, I believe, will be safe, despite the chilling "Everything will stay the same" utterance from the old-new, new-old PM Prayut Chan-o-cha. Safe, because it's a "democratic" government we're having and art censorship would be extremely unbecoming for the dignified PM. And safe because "You Lead Me Down, To The Ocean" is a clever, nuanced presentation of archival objects whose existence is blithely disowned or ignored by the military itself. Sensitivity is required in order to grasp what Tada and his curator, Thanavi Chotpradit, are doing here -- and sensitivity (or let's face it, intelligence) isn't something we can expect from certain departments.

The centrepiece of "You Lead Me Down" is a crisp, hyperrealistic projection of that barnacled tank on one of the walls. You walk into the dark space, and the bright image engulfs you. Overhead, shimmering pieces of clothes combine to create an effect of submergence. We're plunged underwater, face-to face with the tank and the happy fish that glide around it.

The tank is a 30T69-2 model bought from China by the Gen Prem Tinsulanonda-led government in the late 1980s as the tail end of the Cold War left Indochina on edge. In 2010, the army decided to find a new, planet-friendly use for the unused warhorses: they lowered 25 of them into the ocean off the coast of Narathiwat province to serve as an artificial home for corals. The tool for destroying has been recast as life-giving, eco-replenishing equipment, and the fish sing praise to the benevolent military. 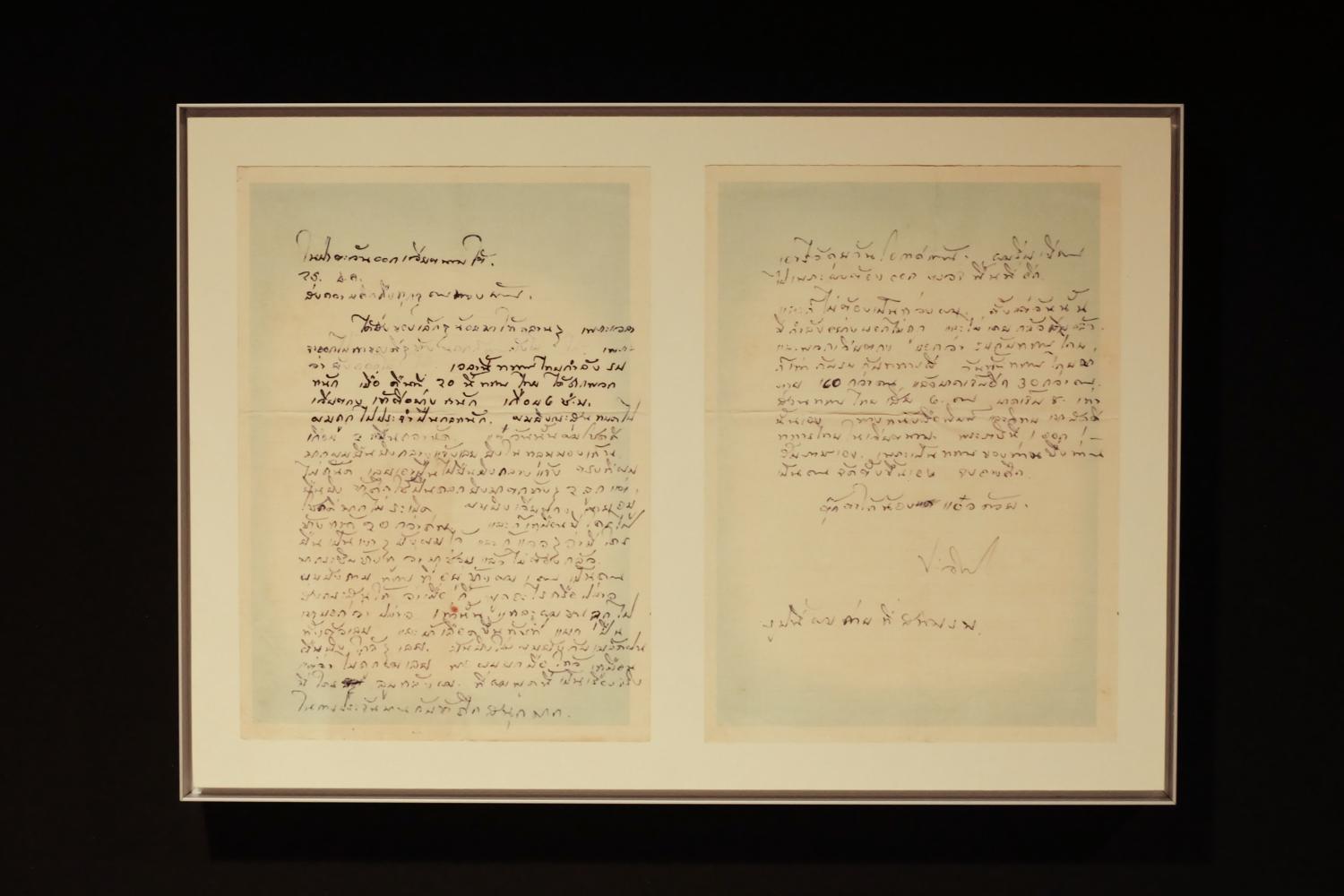 For the exhibition, Tada asked divers to go down 22m into the Gulf of Thailand and take video of the sunken tank. The aquatic scene, projected on the wall-to-beam screen, has an immersive, hypnotic effect as we're lulled into a waterlogged dream featuring the odd metal beast. From there, the video serves as an anchor to other objects in the show that further investigates submerged, hidden, or buried consequences of military-led politics that reached its height in the 1960s and 70s. Tada brings us back on land and to the melancholic memory of wartime life through a small collection of handwritten, yellowed letters written by and to Thai soldiers fighting in the Vietnam War. There, human emotion emerges as a counter-force to the propaganda of sacrifice and nation-saving.

One letter from a soldier stationed at the front begins: "In the forest, as usual … Dec 19, 1967, Dear my beloved wife and children …," before he proceeds to narrate his life in the war in a casual tone. In another, a bereft and frustrated wife wrote to her husband at length to complain how the Ministry of Defence had denied her financial aid despite the man of the house being sent away to fight for the country; the letter's tone of barely-contained anger and escalating despair makes the pages quietly poetic and powerful.

And in another, a soldier used official letterhead paper printed with a bombastic war cry ("fight with courage" or something of that sort) to write an intimate letter to his wife; the longing content of his message, read decades after that disastrous hot war, signals a cold irony against the rousing motto of his battalion. 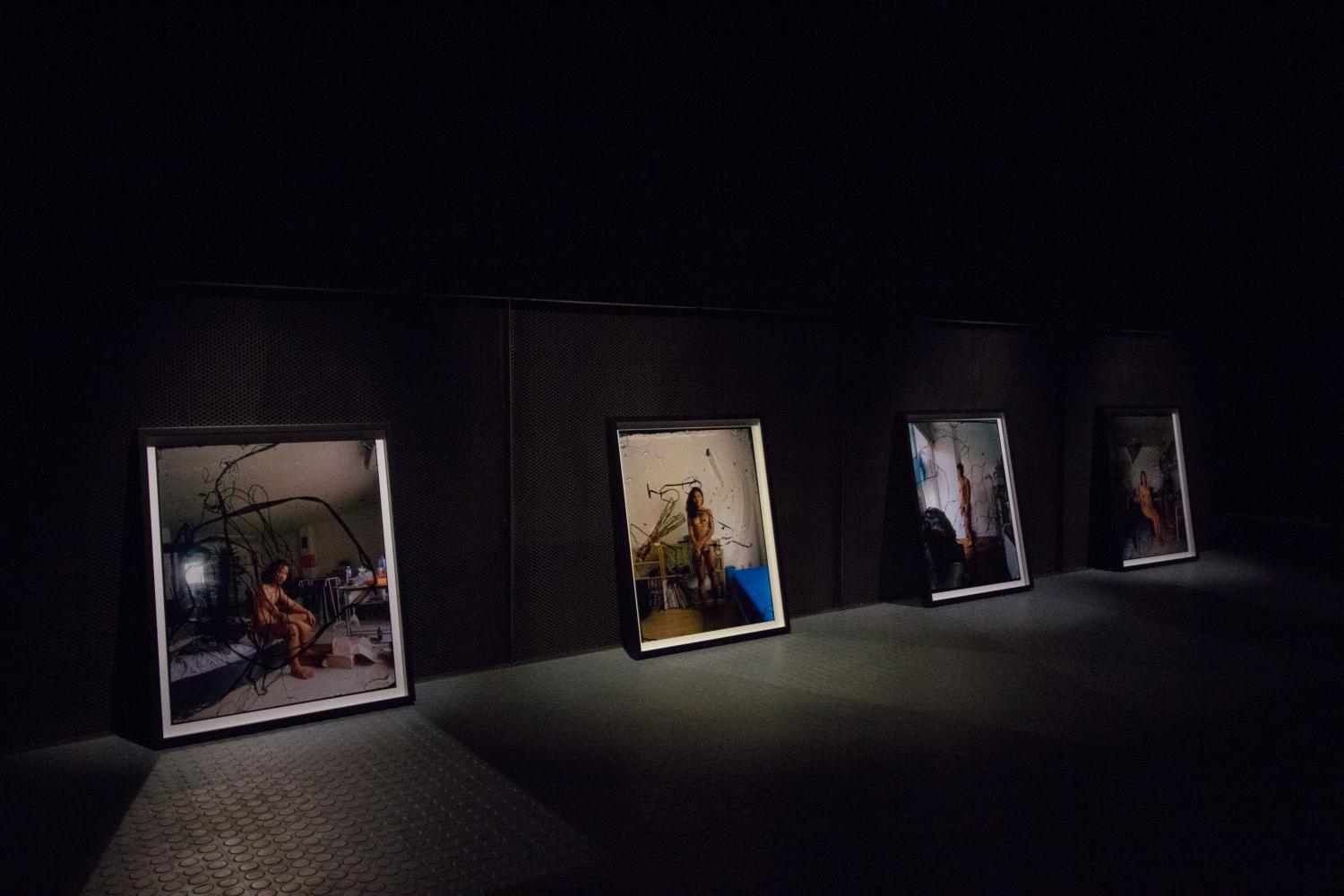 I visited "You Lead Me Down, To The Ocean" last Saturday when historian Tul Israngura Na Ayudhya gave a lecture on the humanity that shines through wartime letters, with examples from the two World Wars, as well as from the objects in this exhibition. It was an enriching talk in which the professor drove home the idea, proposed by Tada and his curator, that war, cold or hot, is constructed around a set of abstract values ("save the nation") that disregards the human experience that makes up to justify those values -- the values that sometimes are just militaristic sloganeering. A soldier who lost his arm wants to go home; the distraught wife wants her husband home despite the repeated call for "sacrifice". Wartime letters bring those feelings out and make humans count again.

We're not at war, sure. Tada's show is serene and almost sad, and yet it has a sense of warlike urgency around it. When the presence of the military -- sustained by the recalcitrant ghost of the Cold War -- remains at large, the tank under the ocean and the forgotten letters of fallen soldiers are more than just museum objects. They are reminders of the times past and present, and of the old-new, new-old aquarium of folly we're living in.